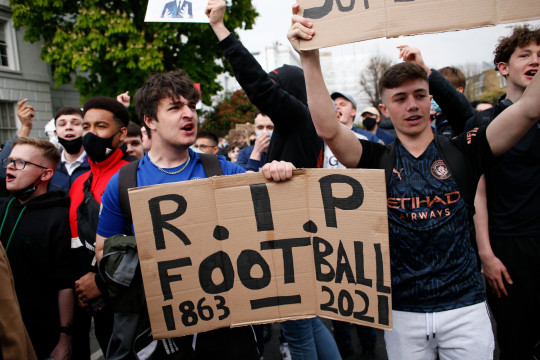 The European Super League: Why you shouldn’t take your fans for granted

You know what fans hate? Being written off as ‘consumers’. Fandom – at least fans tell themselves - is deeper than mere brand preference.

So where does brand loyalty end and fandom begin? After all, businesses do have fans. I can think of a few tech firms with followings that rival the Manson Family for fanaticism.

If your business has fans, it’s because you’re good at what you do. A fan of a sports team, say, or a film franchise, remains a fan no matter how badly the object of their fandom lets them down.

Which brings us to the week’s big sports story.

As we write, the European Super League (ESL) is moribund, with nine of its original twelve members - including all six English teams - having walked away, with most pretending that they thought it was a bad idea all along. Good, thought this blogger.

When this blogger was a kid, the glory-hunters at his school followed Manchester United (younger readers may be surprised to learn that, once upon a time, it was the red half of Manchester that dominated English football) and mocked him for supporting the local no-hopers.

It all seems a bit quaint now. Searching Twitter for arguments in favour of the ESL (which were, happily, hard to come by) we were surprised by how many younger UK football fans claimed allegiance to Real Madrid, or Juventus, or Bayern Munich. Thanks to the internet, following a big team in another country is, in many respects, easier than following a local club.

If your grandparents wanted to take in a game of football they had no choice but to catch a tram to their nearest stadium and watch in person. By contrast, younger fans are spoilt for choice. And for many, the choice seems pretty straightforward. Sit in the cold as their local third-tier outfit takes on Rochdale? Or sit in the warm and watch Barca dazzle in HD?

And that’s just those who are interested in football. As Juventus chairman Florentino Perez – the ESL’s primary architect - argued:

"Football has to change and adapt…16-to-24-year-olds, 40% of them aren't interested in football. Why? (Because) they have other entertainment platforms. We have to change something if we want football to stay alive.”

And, let’s be honest, from a business perspective at least, the Super League makes a sort of sense.

Real Madrid are a great product, but the same can’t be said of many of the teams they meet in La Liga (apologies to any fans of FC Getafe).

Put it like this: You live in a ‘non-traditional football market’ - the United States, say. You enjoy ‘soccer’, but have no nostalgic investment in the sport’s history or traditions. What seems a better way to spend Wednesday afternoon? Watching Real take on Basque outfit Eibar in front of a crowd of 8,000, or watching them tussle with AC Milan before a packed San Siro?

As entertainment markets grow ever more crowded, our attention spans grow ever shorter. Times are changing, and entertainment industries – including sports – will have to evolve or risk going the way of the diplodocus or Blockbuster Video.

So, given this, why was the ESL so unpopular? Where to begin? The project is an affront to the game’s history, say the purists. When clubs are guaranteed a place in European competition, domestic leagues are devalued.

But perhaps most importantly, barely simmering below the surface – was a resentment on the part of ‘legacy fans’ towards newer supporters.

There can be no doubt that the ESL was pitched primarily to the game’s newer fans, those in ‘non-traditional’ markets.

Most would agree that ‘legacy supporters’ - longstanding, often local followers of team - have a greater right to call themselves ‘fans’ than those attracted to a club’s success or high-profile. Trouble is, their custom isn’t any more valuable.

Is there a lesson for other industries here?

From a business perspective, it’s essential to seek out new revenue streams and ways of doing business - especially in a time of great technological flux. Probably your clientele aren’t as emotionally invested in your business as the average football fan, but all businesses owe their best customers a debt of gratitude.

As a number of very popular brands were reminded this week, it’s important not to take established customers – your fans - for granted.